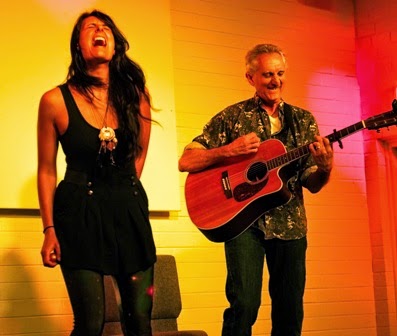 Coming from a Macedonian working-class family, where stories about hardship, romance, black magic, mysticism and work ethic have been passed down through generations, Snez subtly weaves these influences into her own stories and songs, and in the process produces personal and intimate performances.

In 2009, SNEZ released her debut album ‘Gypsy Soul’, and there began her journey as a travelling storyteller. Hailing from the Blue Mountains, west of Sydney, with guitar in hand, SNEZ spent the next 5 years roaming remote and regional Australia, finding a willing audience around campfires, at cattle stations, on the side of highways and along pavements, at nursing homes, refugee camps, cafes, pubs, living rooms and indigenous schools; squeezing her world into a campervan for months at a time with her fellow troubadour, co-writer, guitarist and vocalist Stewart Peters and Freddy, the super dog.

SNEZ seems to be able to cut to the heart of the matter not only lyrically, but live on stage. Her warm, passionate and compelling performance style, is peppered with comedic and haunting tales, layered harmonies and beautiful folk/pop melodies. When it comes to writing and performing, SNEZ definitely rules with her heart, not her head.  Her personal life has become fodder for her art.   Genevieve Jacobs from ABC Radio Canberra commented:
‘We often have singer/songwriters come in and you think …it’s a cookie cutter, it’s same songs about boys and cars…but [with Snez] it is very personal; SNEZ's music is very emotional.’
The multi-award winning musical combo of Stewart Peters and SNEZ, has been a match made in heaven. A veteran in the music industry, Stewart cut his production teeth with the Australian rock producing legends Vanda & Young (AC/DC, Rose tattoo, Flash n the Pan, Choirboys, The Angels and of course The Easybeats) at Alberts Productions during the '80s. Stewart has since moved into a more comfortable (for him) acoustic/adult pop genre, and has had continuing success as a writer/producer with various artists.

SNEZ has performed at many large concerts and festivals around Australia, sharing the stage with notable artists including Renee Geyer, Jenny Morris, Robyne Dunn, Sophie B Hawkins (USA), Mahalia Barnes, and GANGajang.

“OK!  I'm fessin' up.....only had the album less than 24 hours and I'm addicted!
such multi-faceted music from such a distinctive vocalist ..... its delicious!”
Maureen O’Brien, Festival Director of Folk in Broke

“Very artistic and soulful. A real gem in a world of cubic zirconia’s”
Linda Wood, Myspace

LISTEN TO SOME TUNES